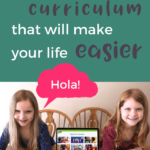 Have you ever received something you need for your homeschool at almost the exact moment you need it that it’s almost a little scary? But then the scariness quickly wears off because you are just so excited. You find yourself shouting, “PERFECT timing!!” and then doing a little happy dance. Yeah, those are good days and one of those days happened to me recently when I found out about an online Spanish curriculum. {Yep, it was a bit of a crazy homeschooler moment for sure.} 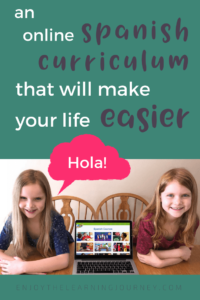 I received the product at no cost and was compensated for my time to review this product. However, I was not required to write a positive review and all opinions are honest and 100% my own. Please read my disclosure policy for more information.

Let me back up a little bit to give you the whole picture.

In December, after 5 1/2 years of homeschooling my 10-year-old Kellan, we decided to send him to school in January. {This is a whole story in and of itself that I’ll be sure to tell you someday.} As you can imagine, there was a mix of excitement and anxiety over this big decision and upcoming transition.

One of the things Kellan was nervous about was Spanish class. He felt really comfortable in most of the academic areas he was headed into, except for Spanish. Why? Well, because I had never taught him Spanish. {yikes!}

Once we made the school decision I was scrambling to at least expose him to the basics of Spanish before he started and so we did what any homeschooler would do. We went to the library and checked out a bunch of books and videos and we got started. Except what we found was less than exciting. The videos were clearly intended for toddlers and preschoolers and Kellan would have none of it. The books were so-so with some of them lacking simple pronunciation guides. Overall, a bust.

And so Kellan went to school in January without much knowledge of Spanish. And he survived. But this isn’t a survival story, friend. Because once that all happened I was determined to do things differently with my seven-year-old twins.

I don’t want to put my girls in the same position as I put Kellan. I want them to be prepared for whatever comes their way. If they end up going to school then they are going to go knowing some Spanish. And since we haven’t actually made that decision yet, even if they don’t go off to school they will still know some Spanish! My mind was made up.

But what would I do? Because the materials at the library were no good. And the only word I remember from Spanish class is el gato. So, who would teach them?

And as I was contemplating my options, which weren’t many, it happened. I learned about this online Spanish curriculum, Foreign Languages for Kids by Kids®! Not only did I learn about it, but I actually had an opportunity to use it with my girls! {Don’t ya just love when this kind of stuff happens?!}

And I am happy to tell you that this has been a wonderful solution for us! If you are looking for a simple, no-stress way to teach your children Spanish then Foreign Language for Kids by Kids® is a great option. If you’ve never learned Spanish, or are kind of like me and don’t remember much from your days in Spanish class, then this may be a perfect solution for teaching your kids Spanish. 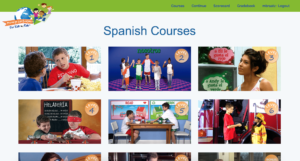 What is Foreign Languages for Kids by Kids®?

Foreign Language for Kids by Kids is a Spanish curriculum designed for homeschoolers that traditional schoolers can also benefit from. There is an online membership with an option of physical products including DVDs.

The video lessons include children acting out everyday situations while speaking the appropriate Spanish words and phrases. The words are also put on the screen so your child can see what that word looks like in written form and to help them remember it.

There is a rapid review at the end of each section and there are also interactive quizzes (spoken and written), workbook activities such as word searches (that can be completed online if you choose the online option) and a section on Spanish speaking countries and cultures.

We have been using the online membership with no physical products and it has been working out great! In fact, my girls really like watching the videos and repeating back what they are learning. They recently had a conversation with their brother telling him how much they like it and he told them he thinks his Spanish class at school is boring. {shhh! don’t tell!} 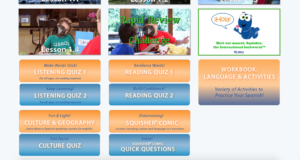 1.) No experience necessary. You do not need to be Spanish speaking or have ever even taken a Spanish class in order to use this curriculum with your children. You can learn right along with them!

3.) The actors are children. The actors in the videos are mostly children which is very appealing to the intended audience….children. Plus they have some videos that include the family dogs which my girls especially love.

5.) There is also review, quizzes and workbook activities. There is plenty of review built in and additional quizzes and activities for your child to complete to reinforce what they are learning.

7.) Rewatch the videos as many times as you want. The great thing about the videos is that as long as you have a membership you can always go back online and rewatch them as your child wants or needs. (And if you purchase the DVDs those obviously can be kept forever).

8.) Your children can learn Spanish in as little as 15 minutes per day twice a week. Huge chunks of time aren’t needed in order for your children to learn Spanish. Consistency is certainly important but that doesn’t mean you need to spend an hour every single day on Spanish. I have personally found that 15 minute sessions are totally doable and easy to squeeze in several times a week.

9.) Your kids will enjoy the lessons. I honestly believe they will. My girls would not hesitate to let me know if they didn’t like something. And they have made it a point to let me know how much they like watching the Spanish videos and taking the quizzes. It’s actually fun for them!

They are thinking pretty hard here!

Is there a giveaway?

(Prize shipped only to USA addresses.)

If you think this Spanish curriculum might be a good fit for your family then you’ll want to look into it right away because there is a great deal going on now.

There is a discount offer just for you!!

Here are some of the great Foreign Languages for Kids by Kids® products that you’ll want to check out!

We are a participant in the Amazon Services LLC Associates Program, an affiliate advertising program designed to provide a means for us to earn fees by linking to Amazon.com and affiliated sites.
And that’s a wrap. Another homeschool year in th