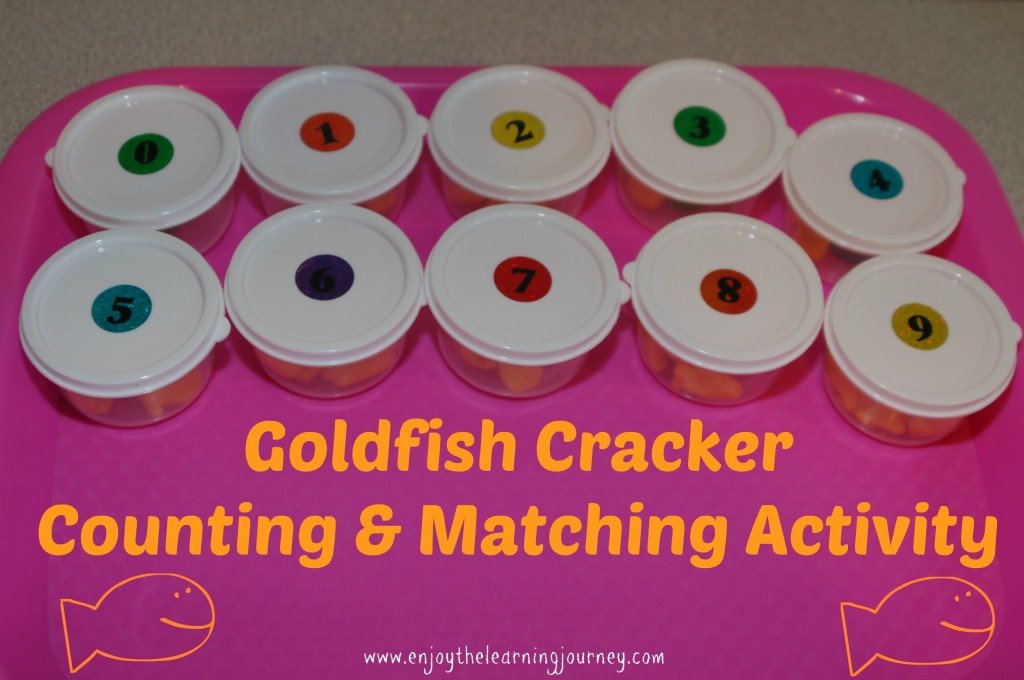 This is a very simple and inexpensive activity for teaching counting, number recognition and matching.   I knew that I wanted to incorporate Goldfish crackers into our G is for Goldfish theme week but initially I wasn’t sure how.  I thought about the skills that Tootsie Pop and Kitty Cat could use some extra practice on and decided that a number recognition and counting/sorting activity would be great for them.  So here is what I came up with.

I purchased a bag of Goldfish crackers and a package of small storage containers with lids from Dollar Tree (a package of 10 for only $1).  I also had some number stickers that I had previously purchased from the dollar section at Target. 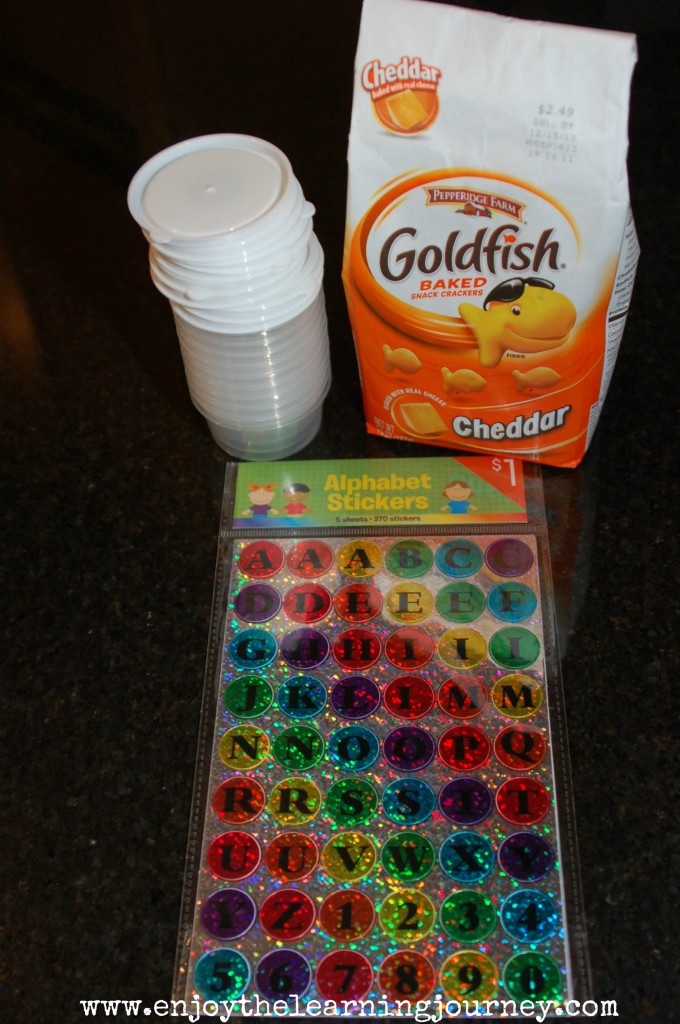 Once I had the materials, I put together this fun little activity with a great reward at the end.

First, I put a number sticker on each of the ten lids and on the bottom inside of each of the ten small containers.  I decided on 0-9 instead of 1-10 because I want to make sure the girls understand the concept of zero. 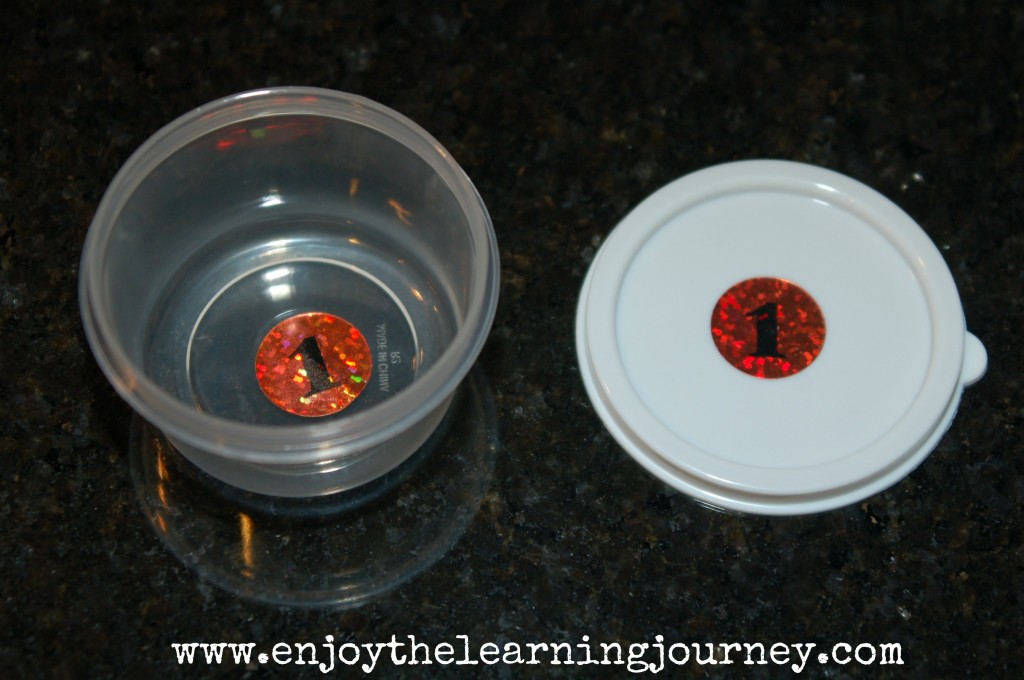 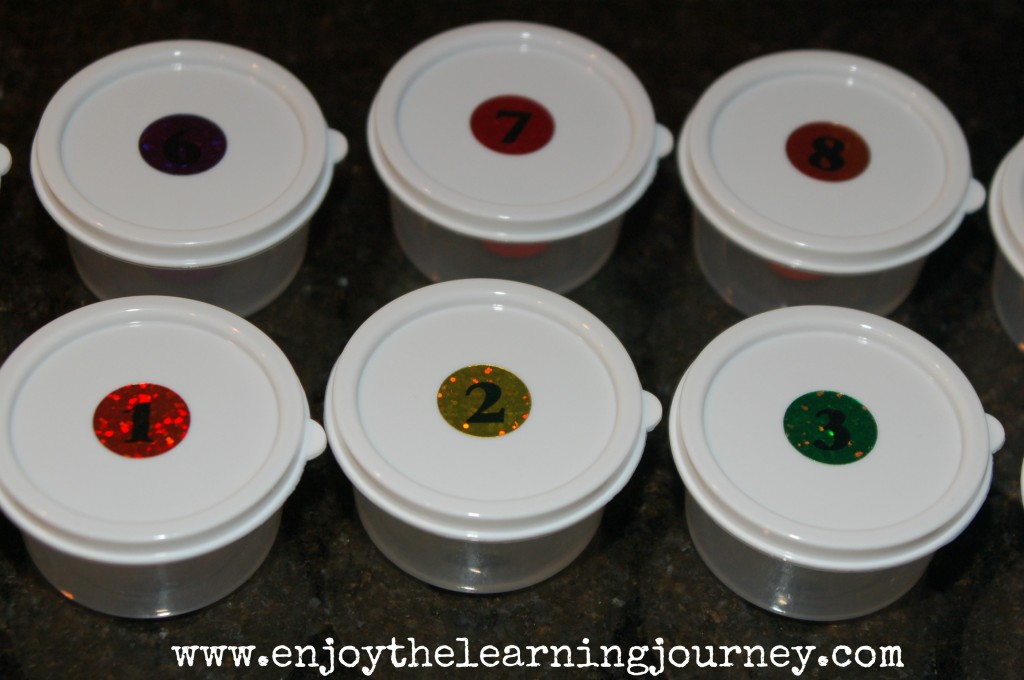 Next, I put a total of 45 Goldfish crackers into a separate bowl and organized everything onto a tray as seen below.  I randomly stacked the lids so that they were not in numerical order.

Then I presented the activity to the children and had them complete it one at a time (since I only have one set of containers).  I explained that they were to look at the number inside the cup, say the number, and then count out that number of Goldfish crackers while placing them into the cup.  I asked the children to leave the lids where they were until all the Goldfish crackers were counted. 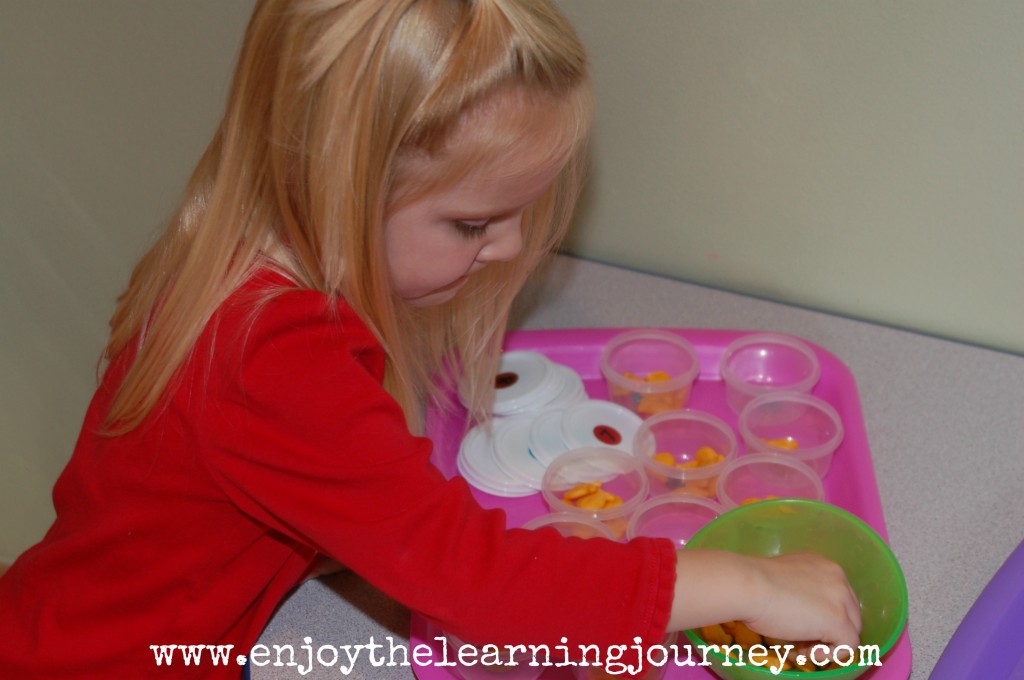 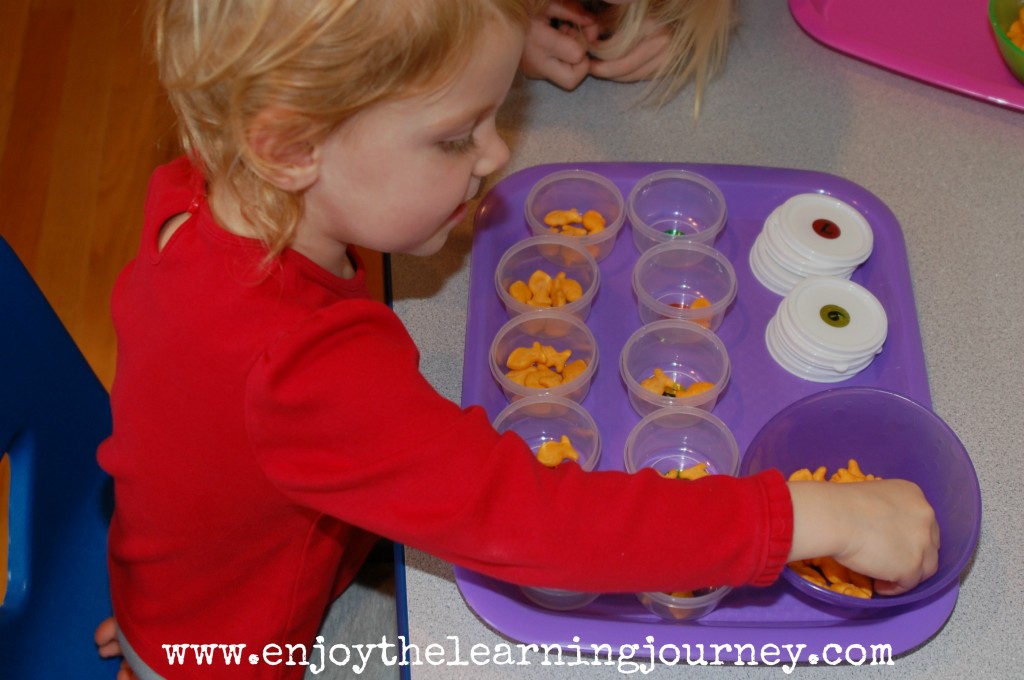 This was a breeze for Snootz, but you can certainly adapt this activity for a child that needs more of a challenge.  After your child counts the Goldfish into the cups, have them complete some addition or subtraction equations.  For example, ask them “If you pour the cup of 9 Goldfish and the cup of 8 Goldfish back into the blue bowl, how many crackers will now be in the blue bowl?” or “If you have your cup of 9 Goldfish and eat 3 crackers out of it, how many will you have left?” 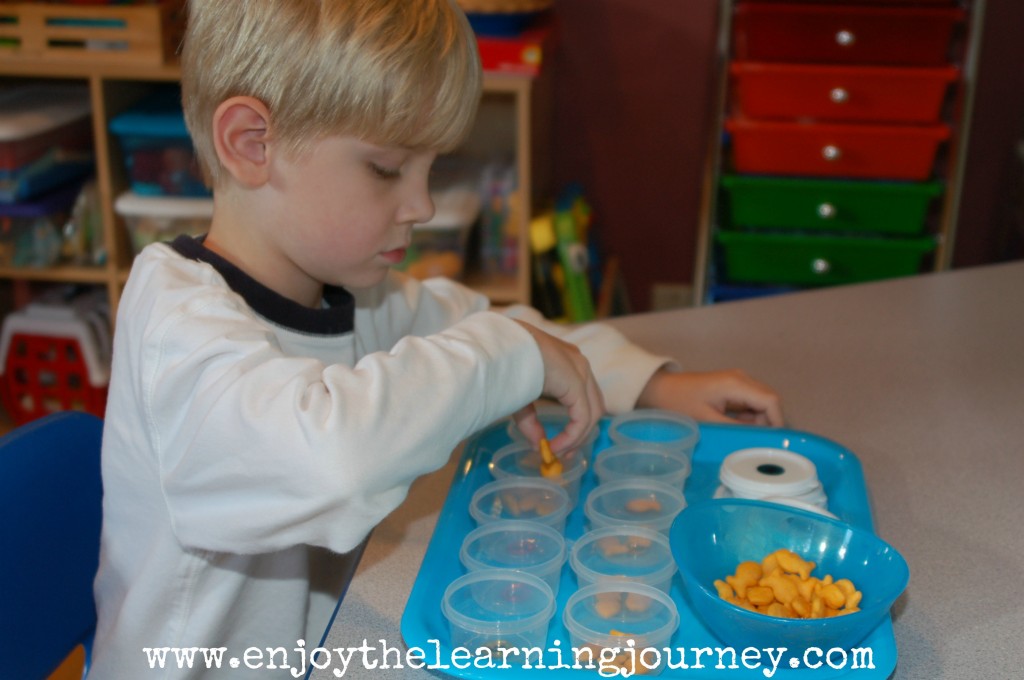 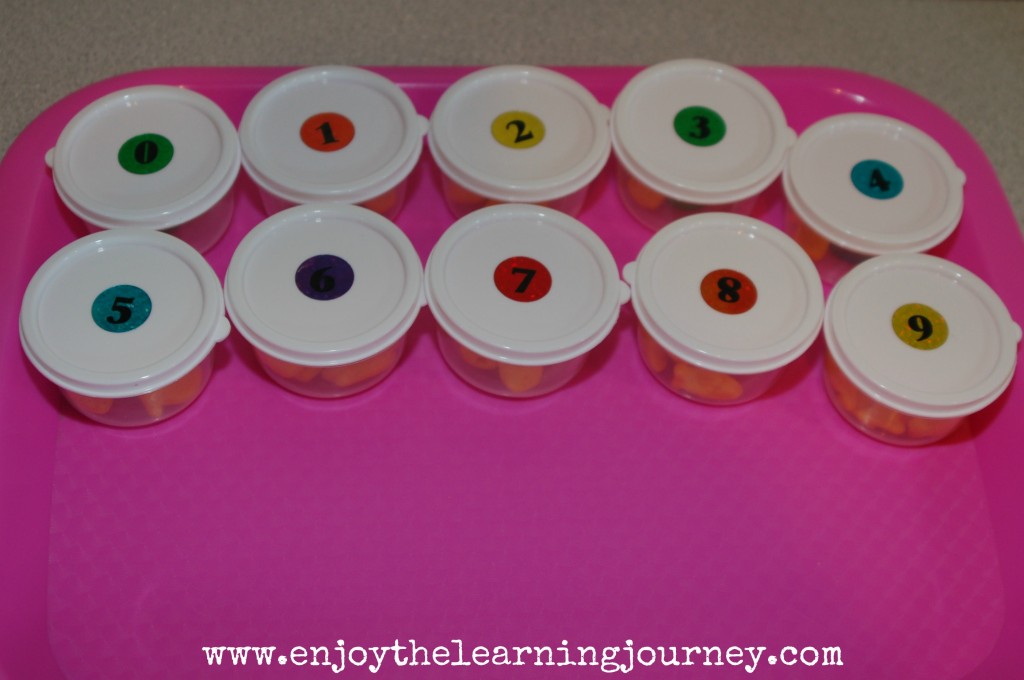 Once all the lids were matched to the cups, the children could remove each lid and dump the Goldfish crackers back into the larger bowl. 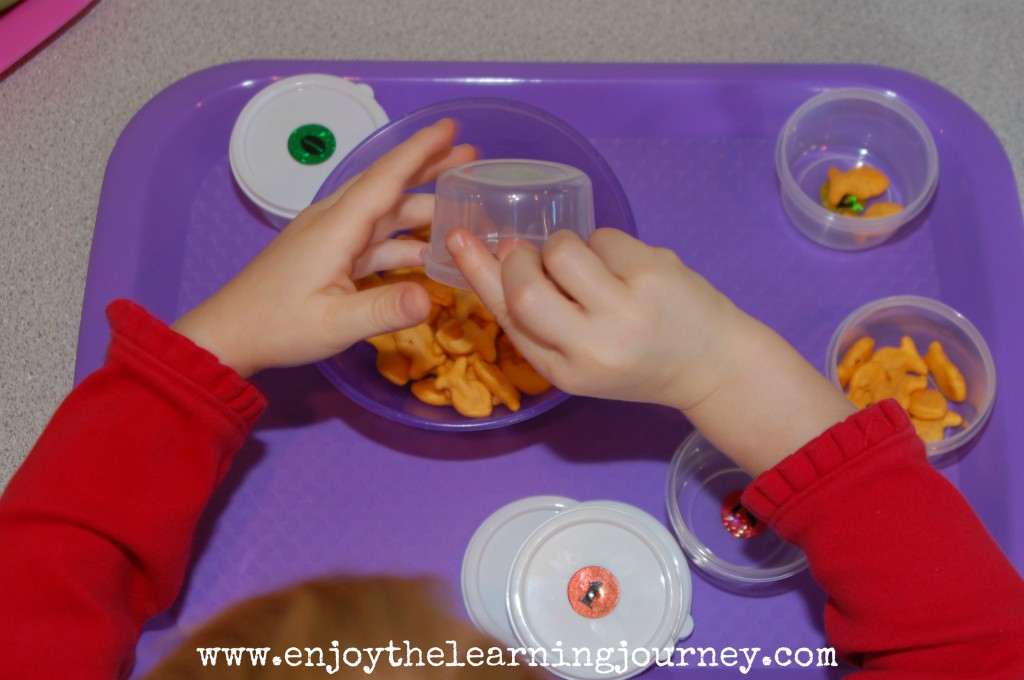 After they worked so hard to complete the activity they were rewarded with a yummy snack.  They liked eating the Goldfish crackers most of all! 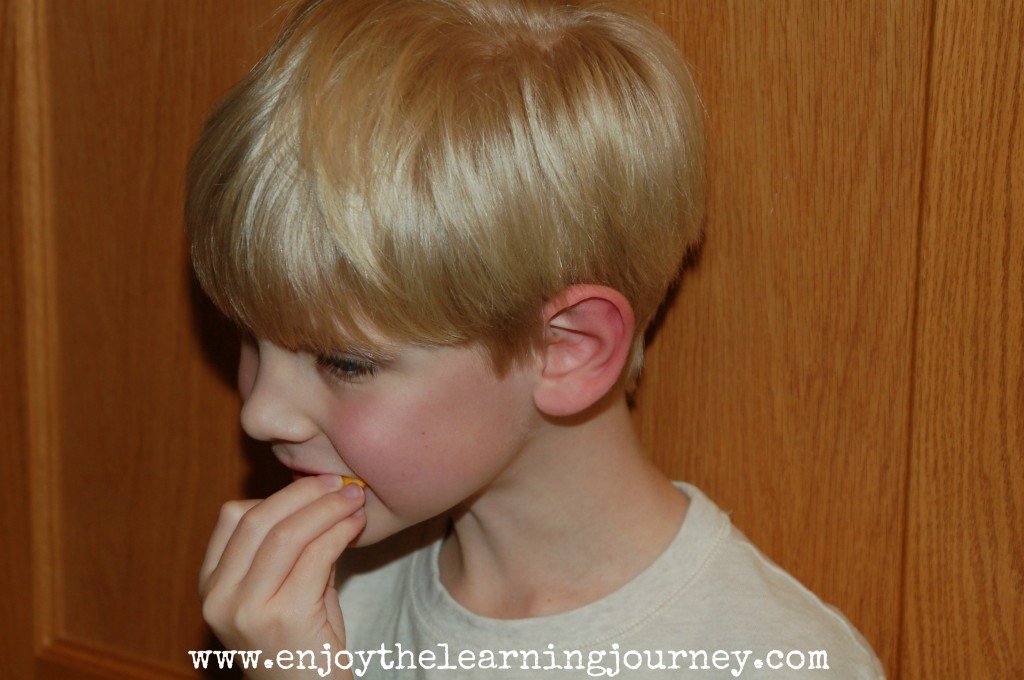 You can modify this activity in any way that makes it easier for you.  If you have small bowls on hand you can use those and don’t have to go out and buy anything.  You also don’t necessarily need lids and could skip that step.  Another option would be to use disposable cups or bowls and write the number with a marker on them.  And if you prefer to use Cheerios, Fruit Loops, Teddy Grahams or any other type of small snack food you could do that too.