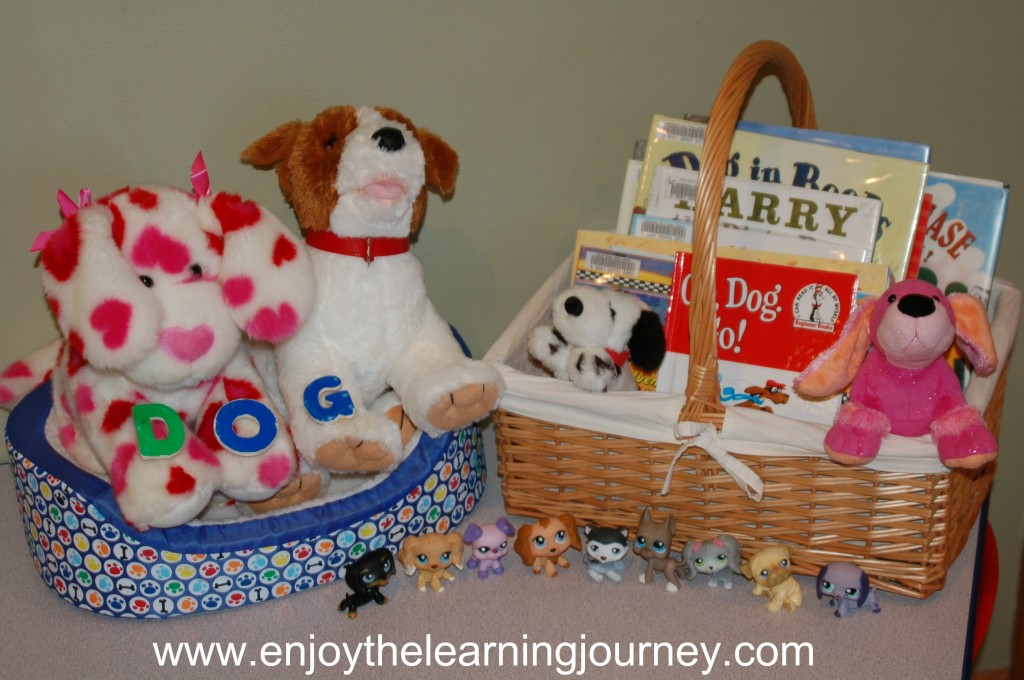 Snootz, Tootsie Pop and Kitty Cat have their cousin to thank for most of the fun dog toys this past week.  She has given our children the cutest hand-me-downs ever.  So the set-up for our D is for Dog theme included a couple of Build-A-Bear dogs, a dog bed, a pink Webkinz dog, a little doggie from this set and a bunch of Littlest Pet Shop dogs.  The D-O-G magnets are from this Melissa and Doug set.

As usual we read a whole lot of books which everyone enjoyed.  Our basket of dog books included (favorites starred):

Tootsie Pop and Kitty Cat decided to dress-up as the Princess and the Dog for fun! This was all their idea; because, in fact, I hadn’t even thought about the dog costume when I put together the plan for the week.  I love it when the kids come up with their own ideas to go along with whatever we are working on.  It shows that they are making connections and having fun with what we are doing! 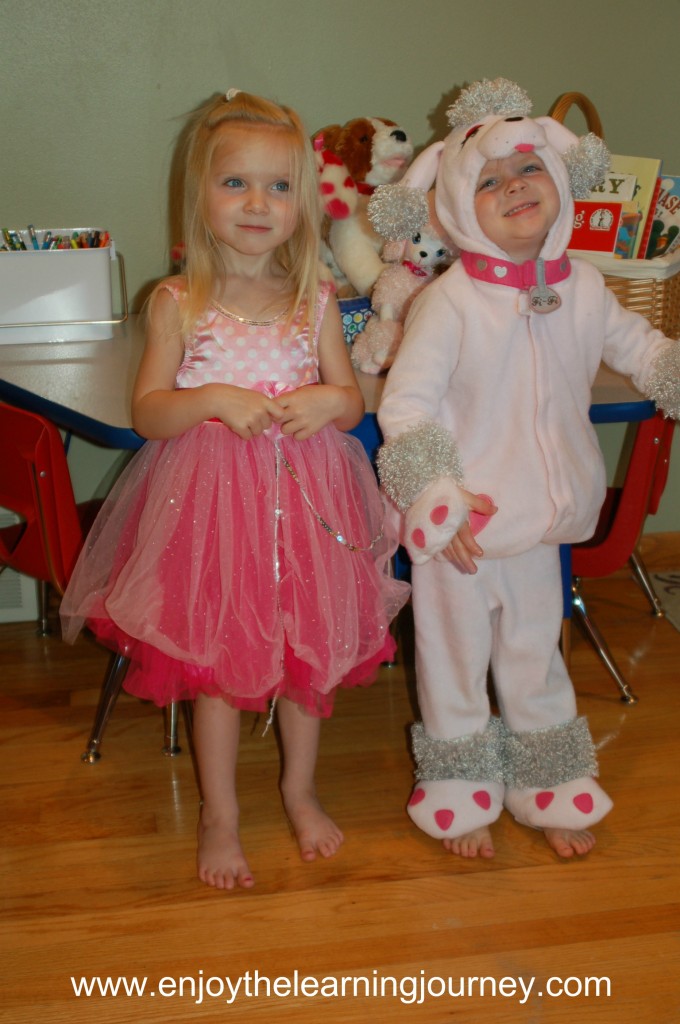 The Princess and the Dog

I usually keep this Leap Frog phonics set in a bin because letters inevitably end up all over our kitchen floor and then I’m tripping over them, but I decided to pull it out since the girls haven’t played with it in a while.  Snootz loved this set when he was 1 and 2 years old.  He played with it often and learned many of the phonics sounds from this toy.  The girls have never gotten that attached to it but they do enjoy playing the alphabet song over and over and over again.  Which reminds me of the other reason why I keep this toy stored in a bin. 🙂

(Note: This particular set has been discontinued and is very expensive to purchase.  You can purchase a set that is similar for a much more reasonable price). 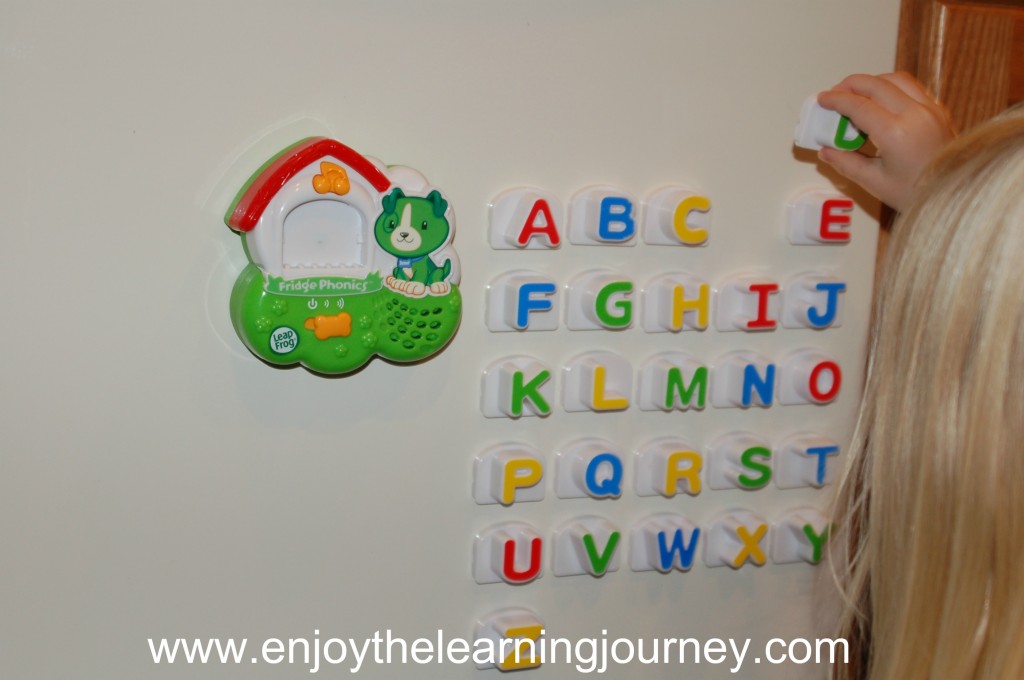 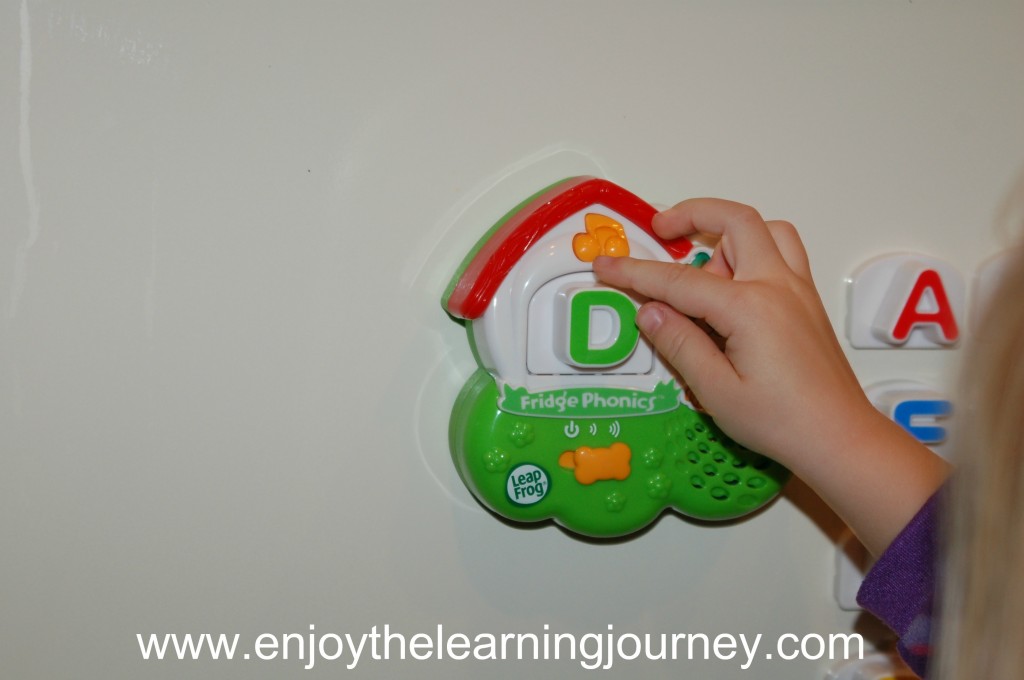 The children did more dot painting this week using the dog picture from this Do-A-Dot Art! book.  The girls like to rub the paints across the paper rather than dot the paper and it is tearing up the sponge tips on the bottles, so I have a feeling we may end up with spongeless-tip dot paints. 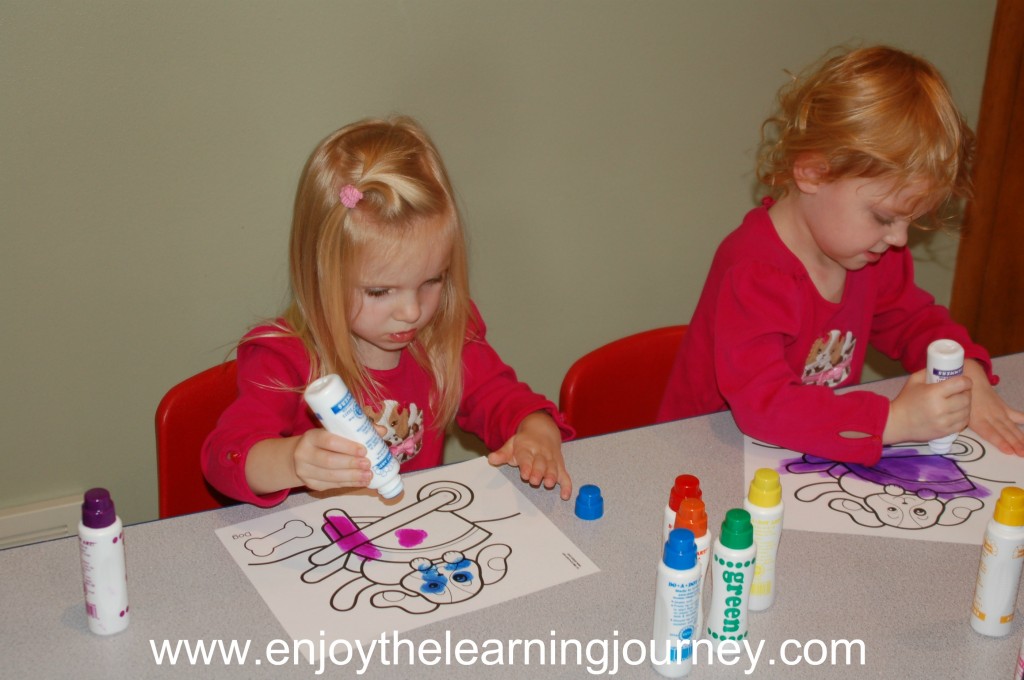 The children completed the activity page from the All About Reading, Pre-Reading program.  They colored the page, painted some spilled dog food onto it and then pasted fabric dresses that I had cut out onto the dog (Snootz wanted a boy dog so his has pants and a shirt).

The girls’ doggy shirts were unintentional but perfect for our theme! 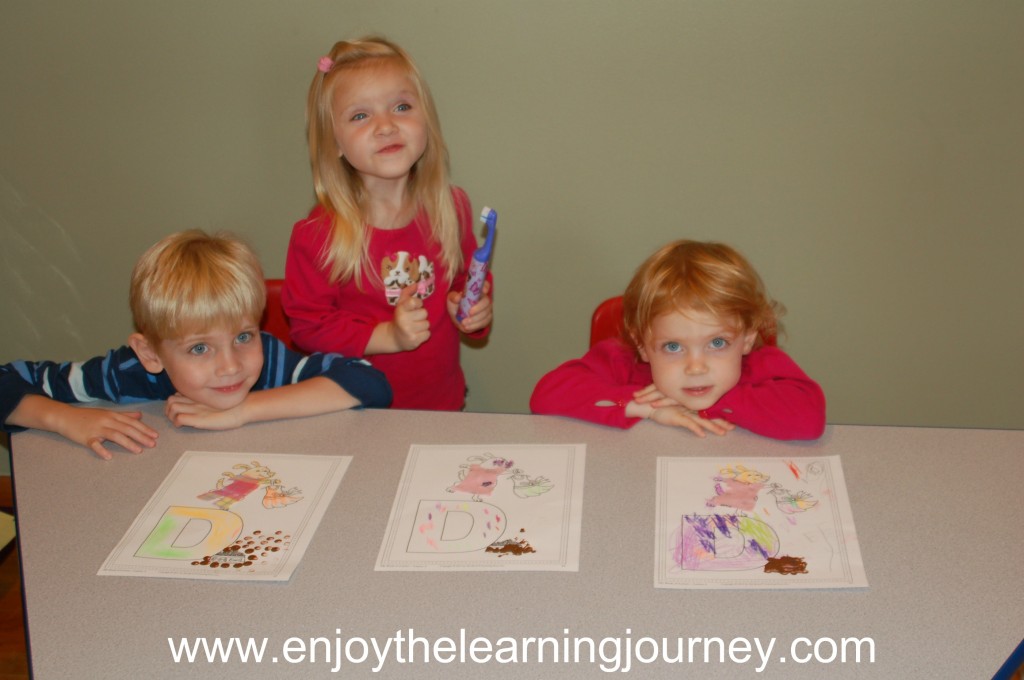 The children also used a dog stencil this week to create a picture.  At age 5, Snootz did well with the stenciling but it’s a pretty tough skill for a 3-year-old so I had to help Kitty Cat a lot (Tootsie Pop wasn’t interested in doing it).  The stencils we have are made out of paper and after one session I have realized that these will not last long.  We may have to get more durable plastic stencils. 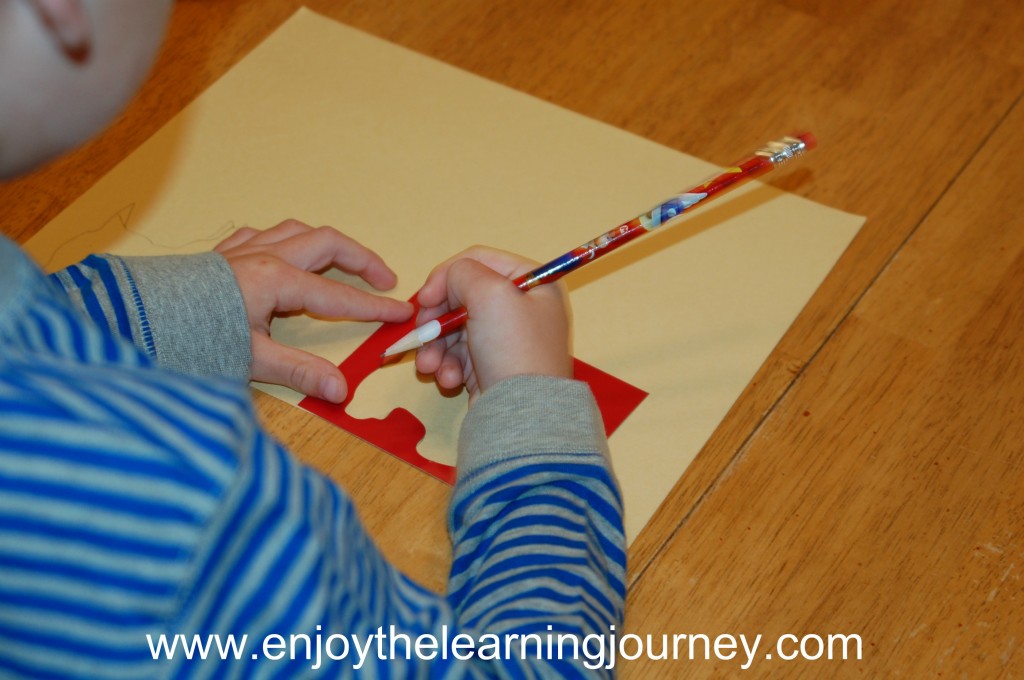 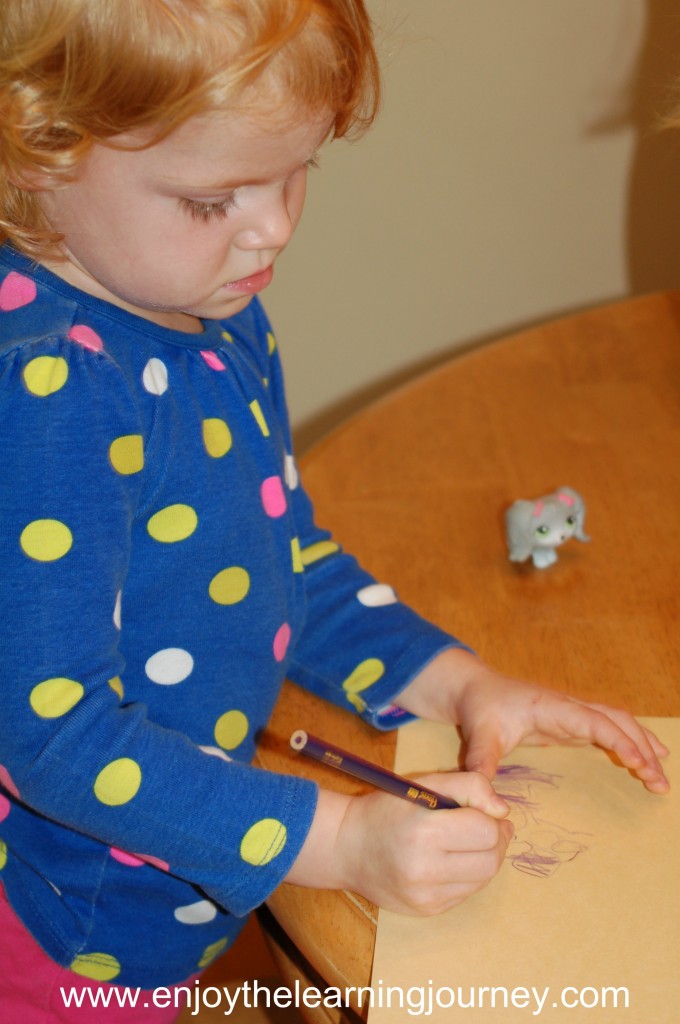 The children also enjoyed the Cat & Dog Number Match Activity that I constructed for them. 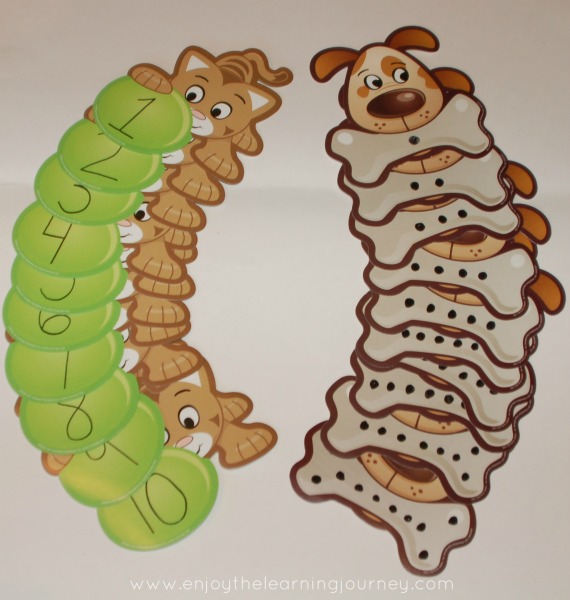 And lastly, we watched a couple of YouTube clips.  This is the second time I’ve done this and the kids have really enjoyed it.  We watched these clips several times just because they wanted to.

The first one was the Dallas Symphony Orchestra playing George Gershwin’s “Walking the Dog” (also known as Promenade).  We listened to the music and also identified the instruments being played.  (First 3:30 min.)

And then we watched the “Walking the Dog” scene from the movie “Shall We Dance” starring Fred Astaire and Ginger Rogers. (First 4:45 min.)

Our dog week was fun but now it’s time to move on to a new theme.  This week we begin E is for Elephant!