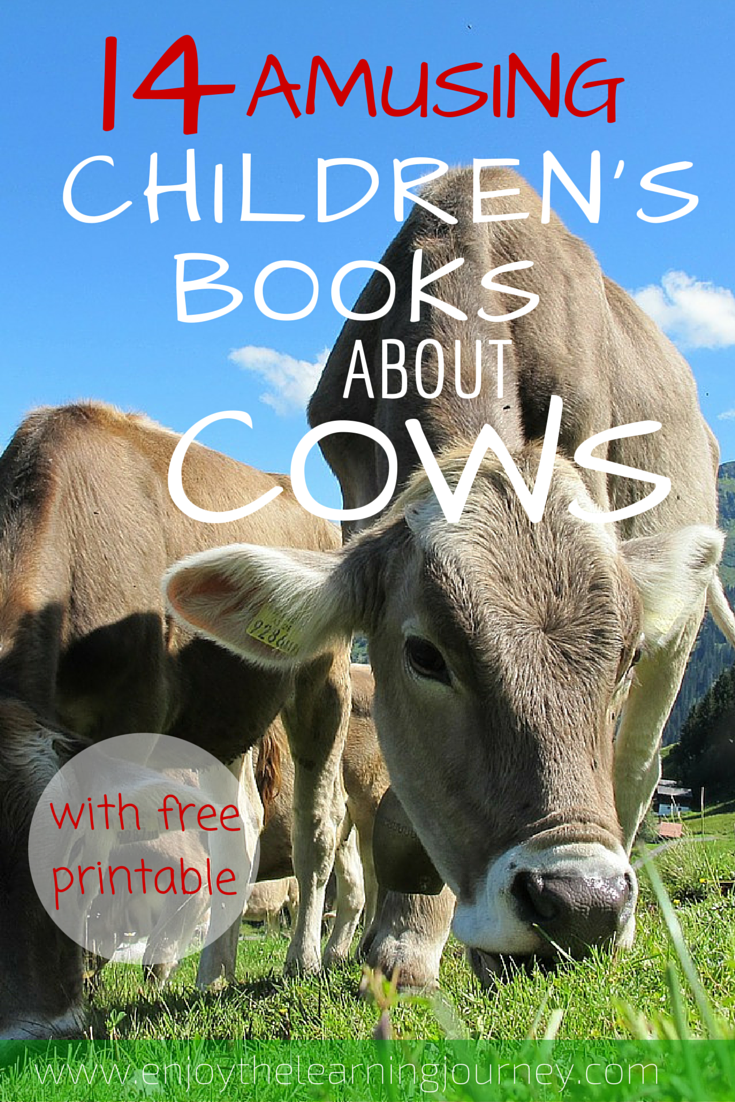 Our children love stories with animals in them, especially because there are so many amazing authors and illustrators who bring the animal characters to life through their writing and illustrations.  These books are no exception.  The children and I enjoyed all of these fiction picture books with cow characters in them and there are a couple of good non-fiction cow books in the mix too.

All of the books on this list are books that the kids and I read together. As I’ve previously mentioned, cozying up on the couch together and reading books is one of my favorite things to do with our children! It is a wonderful way to bond and connect with them as we allow the pages of a great story come alive.

These books can be read as part of a themed-unit on cows, to supplement lowercase letter “c” (c is for cow) in the All About Reading Pre-Reading Program, or just for fun! 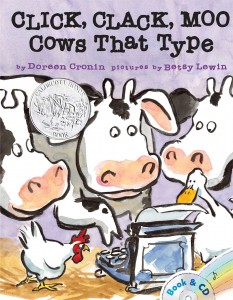 This book has been a favorite in our family since the time our first child was two years old! Farmer Brown has some unusual cows who like to type on a typewriter and one day they post a note asking for electric blankets. Farmer Brown refuses to give them any so they go on strike.  The chickens join in and go on strike too until finally Farmer Brown gives them the electric blankets.  This is such a fun story and makes me feel a wee bit old as I have had to explain to our children what a typewriter is. 😉 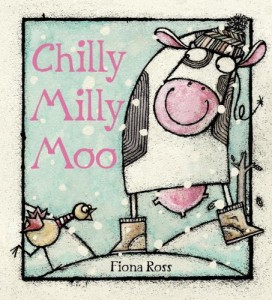 Milly Moo is different than the other cows.  She can’t make milk like them even though she really wants to.  The other cows boast and brag about how much milk they make when it’s hot outside which makes Milly Moo feel miserable.  All of a sudden the weather begins to change and things change for Milly Moo too.  The other cows don’t like the cold but Milly Moo loves it!  The farmer comes to milk her and is in for a huge ice cream surprise! 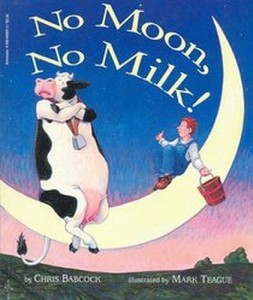 No Moon! No Milk!

Martha is tired of being a cow and one day she confesses to the farmer that she is unhappy with just eating grass and giving milk all day.  She wants to experience something greater and tells him that she won’t give him any milk until he takes her to the moon.  The farmer takes her to several exciting places but they aren’t the moon so Martha isn’t satisfied.  Martha winds up at a moon exhibit at a museum and realizes that it’s not so great after all. 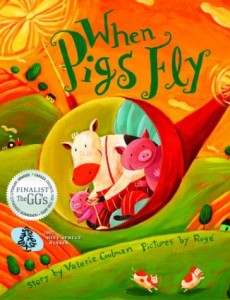 Ralph the cow really wants his dad to buy him a bicycle but Ralph’s dad tells him no.  Not until pigs fly.  That begins Ralph’s mission to learn how to fly a helicopter so that he can bring some pigs onboard with him and get them to “fly”.  It is a story of Ralph’s persistence as everyone continues to tell him that “cows don’t do that.”  Does he get his bike in the end?  You bet he does! 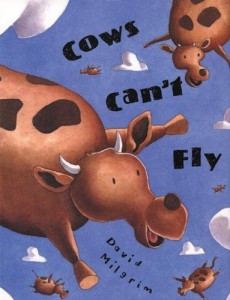 A boy draws a picture of cows flying and the wind picks up the drawing and blows it away.  Off it goes to a farm where the cows see the picture and get the great idea to fly!  The boy sees the cows fly by and tries to tell others to look and see but no one is willing to look.  But the boy is not discouraged because he knows what he saw and believes that if cows can fly then other animals might be able to fly too. 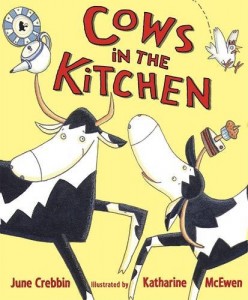 Cows in the Kitchen by June Crebbin

The words in this book can be sung to the tune of Skip to My Lou which makes the story more fun to read. All the animals are having a lot of fun in the house as Tom Farmer naps.  He wakes up and sends them out just to find them in the house again the next times he naps! 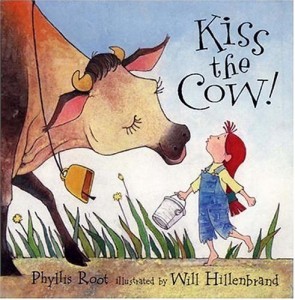 This is one of our favorite cow books.  Every day Mama May milks Luella who provides enough milk and cheese for a large family of children.  Mama May treats their cow well and sings her a song before and after she milks her and also kisses her on the nose.  One day curious little Annalisa decides to milk Luella on her own but doesn’t kiss her on the nose.  This makes Luella sad and she stops making milk.  Mama May tries to convince Annalisa to kiss Luella on her nose but she refuses.  Will Annalisa kiss Luella on the nose so that the children don’t go hungry?  You’ll have to read it to find out what happens! 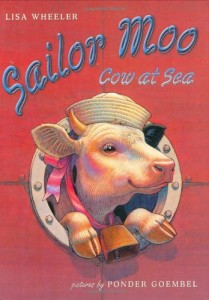 Moo the cow dreams of the sea and leaves her home to follow that dream. She joins a crew of cats and pays her way by providing them milk every day. During a storm she gets thrown overboard and is saved by her manatee friends.  She is picked up by a bunch of bull pirates and falls in love with one of them.  There is a happily-ever-after ending as bull gives up pirating, the two of them get married and make a home together on the Jersey Shore. 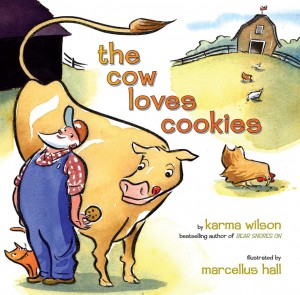 All the animals on the farm are eating the food the farmer gives them and it’s exactly as you’d expect, such as hay for the horse, chicken feed for the chickens and corn for the geese.  Except the cow loves something quite different and when you get to the end of the story you find out why.  It’s cleverly written in rhyme with beautiful illustrations and appealing for young children. 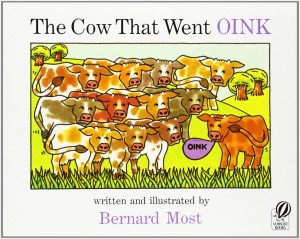 The Cow That Went OINK

This book had one of our four-year-olds laughing hysterically.  In fact, I don’t think I’ve ever seen her laugh so hard from listening to a story before.  In the book, there is a cow who says “oink” and all the animals on the farm laugh at her but then she finds a pig who says “moo” and they teach each other their sounds.  As they are learning, they mistakenly say the wrong sounds which makes the book even funnier. 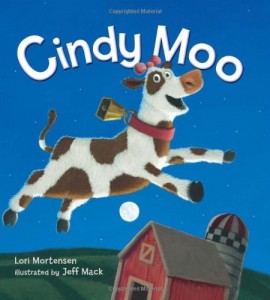 One of our girls received this book as a reward for reaching 250 books in the 1,000 Books Before Kindergarten program.  In this story, the cows hear the Hey Diddle Diddle nursery rhyme which causes a debate about whether or not a cow could jump over the moon.  Cindy Moo believes it’s possible and after many attempts finally shows it’s possible….in a way you might not expect. 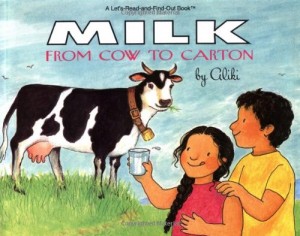 Milk: From Cow to Carton

This is a great book for teaching young children the process of a cow’s milk production as well as what happens once it gets to the dairy and then to the stores.  There is enough detail in the book for children in early elementary grades to learn something new while also appealing to preschoolers. 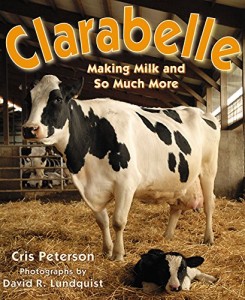 Clarabelle: Making Milk and So Much More

In photographic and written form this book follows Clarabelle the cow through the process of birthing her calf, eating and milking. The book also talks about how the farm uses the manure to provide bedding for the cows, create electricity and fertilizer for the soil. Our four-year-olds really enjoyed looking at the photographs in this book.  However, they had the glazed-eye look as we read certain parts of the book but our seven-year-old loved all the information. 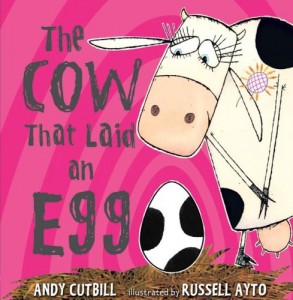 The Cow That Laid an Egg

Marjorie the cow is sad because she feels so ordinary and not special at all.  The chickens on the farm create a plan to help her and the next day Marjorie finds that she has laid an egg! Marjorie is thrilled to be the center of attention and feels much more special but the other cows don’t believe that she really laid an egg. Marjorie wants to prove it’s her baby and when the egg finally hatches, out comes a chicken that says……”Moooo!” 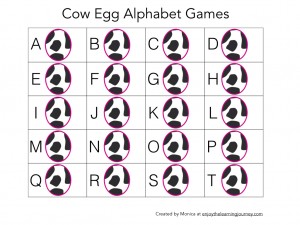 Please make sure you sign up for free email updates to receive additional book lists and printables!

Make sure to visit iHomeschool Network for more awesome book lists for your homeschool: 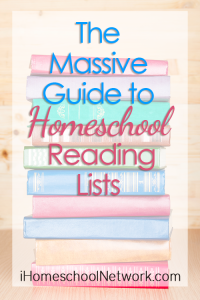